Petr Bares was thinking about ice hockey even when he was a player. He thought about training forms, training amounts and promotion of talent. At the ERC Ingolstadt, for which he was an attack player from the fourth to the DEL time, he is now the coordinator of young talent, pushing talent work in the association. He has developed a concept to support players from the basics and prepare them for a career as adults.

Bares had a simple idea: good trainers do good work. Therefore, Bares brought in people who he was certain would benefit the project of promoting the young talents of the ERC. Therefore, he got Dmitri Kurnosow and Terry Campbell for the youngest, Markus Hätinen for the young students, Franz Köstner for the boys, Eddy Uvira for the students, Richard Neubauer and Thomas Gayerhoss for the amateurs. Bares, like the other former players, takes care of students and youths. Five levels and cooperations with Kaufbeuren, Bayreuth and Regensburg are to pave the way towards professional sports for your young talents.

"Ice hockey is a sport in which you have to move a lot," says Bares. "Therefore, the proper movement sequence should be learned very young. The prerequisite is skating – if you're slow, you will be in trouble in ice hockey." Running bends, starting and decelerating are the things taught in the popular running school of the ERC. It is a good start into ice hockey. Those who have mastered the automatisms there can move on to the second level as smallest students confidently. 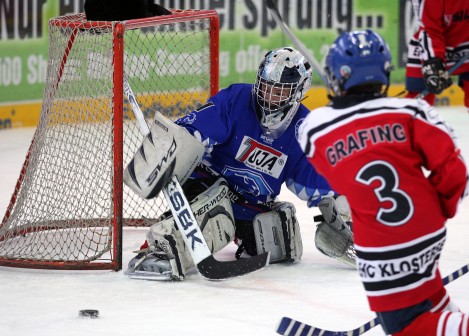 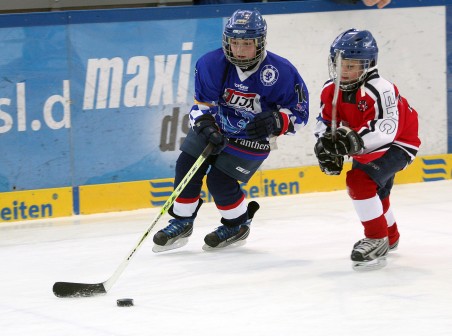 From the bottom on our young Panthers are trained and developed. (Fotos: Meyer/Bösl)

The movement flow on the skids has been mastered? The following second section of training now adds the stick technique, shot training, exercises for getting up and coordination with the jump rope. This is the basic equipment for any ice hockey player that is taught to the youngest and young students and boys. Some show very early that they can handle the stick well, Bares says.

From the youngsters' class "Boys" onwards, duel behaviour is part of the training plan as well. How do you behave properly when fighting for the puck in a curve, at what angle to you run in there? How do you play two against two on a reduced area? Such exercises also deal with timing, tactics and the targeted use of body and stick. 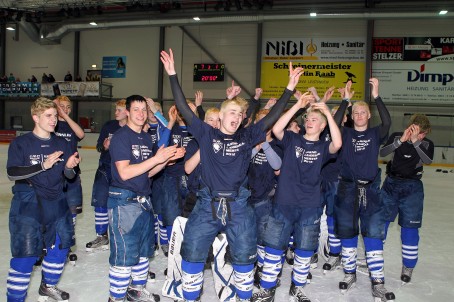 In the student and youth age, trainers and team work to refine the talents' skills. As on the levels before, it is mandatory to keep an iron discipline on the one hand as well as enthusiasm on the other. The trainers need to perform well here. Bares always "hated it when the trainer sent us from the goal line to the blue line and back" during his time as a player. "If you let two play against two on the whole ice, however, players run similar distances at top speed."

"The players accept such exercises," says Bares, adding with a laugh: "There's no word said in the cabin after the training. That's how it should be. The players are tired. They ran a lot. Why did they run so much? Because they wanted to win. They didn't just do their running exercises willingly, but also learned playing elements and tactics."

After the youth level, the talents will strive to become professionals. The second seniors' team under coach Neubauer is one way to collect some first experience at adult level.

By the way: The cooperation partner EV Regensburg (Oberliga), EHC Bayreuth (Oberliga) and ESV Kaufbeuren (DEL2) and their DNL teams also ensure a fitting passage from the youth level to the adult one. The Audi Sportakademie offers talents who are not from the region an opportunity to profit from the ERC way as well. The Ingolstadt way – a concept that promises success for sustainable promotion of talent.