Saturn Arena has been opened in September 2003. Since the season 2003/04, ERC Ingolstadt plays its homegames in the multifunctional stadium. Maximal capacity: 4815 seats (includes 2922 stands). For VIP guests, there are two VIP areas and eight loges. The regular press-area gives 15 reporters a place to work. Three big catering points plus various refreshment stands help you against hunger and thurst. The crowd for guests find seats in Block N.

Your regular ERC-ticket include the fair for coming and leaving the homegame with INVG.

From Munich or Nuremberg:

Take the highway A9, leave at the exit "Ingolstadt-Süd" and take Manchinger Straße to the right towards city center. At the big crossroad in front of Saturn Arena head straight forward.

Take the B300 towards Ingolstadt. Having passed the village Weichenried for 5 kilometres, go right and take the B13 until you arrive in Ingolstadt. Take Münchner Straße, pass Central Station and head for city center. At the big crossroad go right for 500 metres to Saturn Arena.

Take highway A93 towars Munich until Dreieck Holledau where you change to A9 with direction Nuremberg (then as described above). 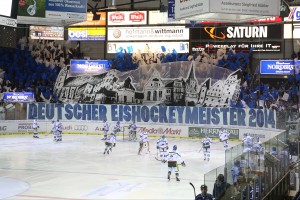